skip to main | skip to sidebar

See? You are not suffering alone.

Key facts and figures about fertility.

One in six couples worldwide has some type of infertility problem. Leading scientists and fertility doctors are meeting here this week to discuss the latest research and advances in treatment.

Following are key facts and figures about infertility.

- Forty percent of infertility cases are linked to men and an equal share are due to a female problem. In 20 percent of cases there is a joint problem.

- Fertility decreases as a woman ages and approaches the menopause. Women are generally thought to be at their most fertile between 20-25 years old.

- Hormonal disorders, damaged or blocked fallopian tubes and endometriosis, a condition in which tissue that normally lines the uterus is found elsewhere in the body, are common causes of female infertility.

- Low sperm count or poor sperm shape or swimming ability are the major problems in male infertility. A fertile male produces at least 20 million sperm per millilitre of semen. Fewer than that amount is considered infertile.

- Women are born with more than a million eggs that diminish as they age but men produce sperm daily.

- A normal couple in their mid-20s having regular sex have a one in four chance of conceiving each month.

- Infertility is defined as the inability of a couple to conceive after a year of trying.

- Louise Brown, the world's first test tube baby, was born 27 years ago in Britain. Since her birth, nearly 2 million children worldwide have been conceived with the aid of fertility treatments.

- Most fertility treatments take place in women between 30-39 years old.

- Europe leads the world in assisted reproductive technology (ART). In 2001, more than 289,690 ART treatments, resulting in an estimated 55,000 births, were reported in 23 European countries. This compares to 99,989 in the United States in 2000, according to the European Society of Human Reproduction & Embryology (ESHRE).
In Denmark, 3.9 percent of all children are born with the help of fertility techniques, compared to 3.2 percent in Slovenia, 2.8 percent in Iceland and Sweden and 1.3 percent in Britain.

- More than half of all ART treatments in Europe are done in France, Britain and Germany.

Before You Were Born...Our Wish For A Baby 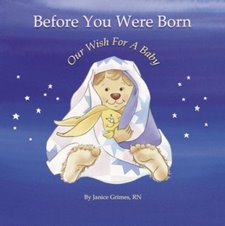 Janice
I am a Registered Nurse and worked ER for the majority of my career. I was an IVF patient. I worked in an IVF clinic in the Midwest for 8 years. I am an advocate for disclosing to children the truth about their conception, especially when donor gametes are used. I created a line of storybooks for these children that explain in loving language the special story and circumstances that occurred before they were born.